On April 30, 2018, the Supreme Court of California issued an important decision affecting the analysis of whether a worker is properly classified as an independent contractor versus an employee.  The classification of a worker as an employee or an independent contractor impacts the rights and remedies of workers, and it is often a contentious issue in employment and labor disputes.

The issue before the Supreme Court was “what standard applies, under California law, in determining whether workers should be classified as employees or as independent contractors for purposes of California wage orders, which impose obligations relating to the minimum wages, maximum hours, and a limited number of very basic working conditions (such as minimally required meal and rest breaks) of California employees.”  Wage Orders supplement other worker protections, and different wage orders apply to different industries.  The Dynamex case involved wage order No. 9, which governs the transportation industry.

The employer and/or hiring entity in the class action suit, Dynamex, argued that the wage order definitions of an employee did not apply to the delivery drivers’ claims. It is argued that these definitions are more favorable, i.e. more workers will be characterized as employees rather than independent contractors under these definitions.  The definitions of an employee as it relates to wage orders were set forth in an earlier Supreme Court decision entitled Martinez v. Combs, 49 Cal.4th 35, 64 (2010). In Martinez, the Supreme Court set forth the wage order definitions of an employee as follows: (a) to exercise control over the wages, hours, or working conditions, or (b) to suffer or permit to work, or (c) to engage, thereby creating a common law employment relationship.  Dynamex argued that these standards did not apply to the plaintiffs’ claims.  Rather, Dynamex argued that the standards set forth in the seminal decision S. G. Borello & Sons, Inc. v. Department of Industrial Relations, 48 Cal. 3d 341 (1989) should be applied in determining whether a worker is an employee or an independent contractor.  The California Supreme Court disagreed.

Specifically, the Court concluded that the “suffer or permit to work” definition of “employ” contained may be relied upon in evaluating whether a worker is an employee or, instead, an independent contractor for purposes of the obligations imposed by the wage order.

The Court went further and prescribed the “ABC” test, which is utilized in other jurisdictions, to determine whether a worker is properly an independent contractor under the “suffer or permit to work” definition.  According to the Court, the ABC test provides that the wage order does not apply only if the hiring entity establishes the following: (A) that the worker is free from the control and direction of the hirer in connection with the performance of the work, both under the contract for the performance of such work and in fact; (B) that the worker performs work that is outside the usual course of the hiring entity’s business; and (C) that the worker is customarily engaged in an independently established trade, occupation, or business of the same nature as the work performed for the hiring entity.

The Dynamex decision clarifies what standards lawyers and judges must use to determine whether a worker is properly classified as an employee or an independent contractor.  However, the Supreme Court has not invalidated other cases including Borello, and a worker should consult an attorney if she believes she is being improperly classified as an independent contractor. 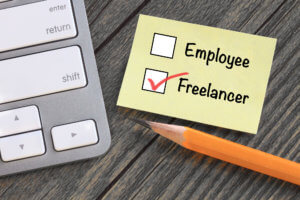